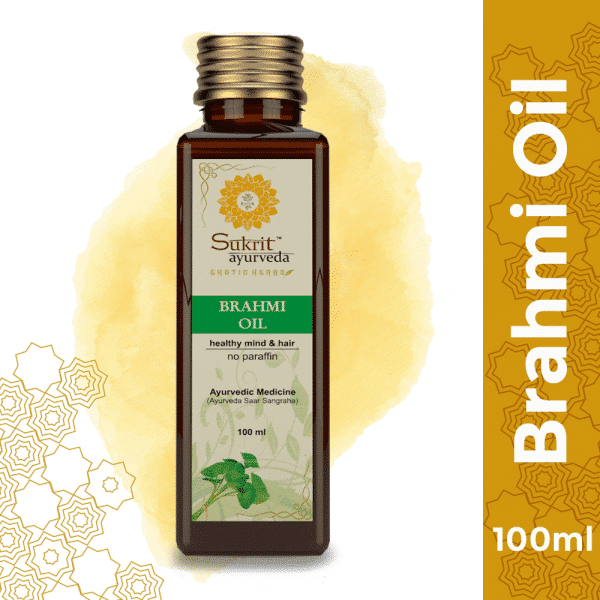 Made from the herb ‘Bacopa monneri’, Brahmi oil has been a choice of Ayurvedic oil for dealing with issues of mental health ranging from mood, enhancing memory, cognition and other psychiatric disorders.

Brahmi is known as one of the oldest ‘Nootropic’- a smart drug that promotes cognitive abilities. The medicinal benefits of Brahmi’s have been well documented in ‘Charak Samhita’ which is referred to as the world’s oldest medical literature. As stated above, because of its cognitive functions, this herb is an indispensable herbal formulation as Ayurvedic Chayawanprash. The medicinal benefits of BRAHMI oil can rightly call it a BRAIN oil.

Brahmi as the herb is known for neuro-pharmacological actions and contains ‘Saponins’ which enhance nerve impulse transmission. The ‘Bacosides’ in Brahmi help in repairing damaged neurons by enhancing kinase activity and neuronal synthesis. The Ayurvedic physicians though use Brahmi in the form of tablets but Brahmi oil is widely being used as hair oil application, probably because of its bitter taste and as better therapeutic compliance in the form of oil.

Under the Ayurveda literature, it is classified as a Medhya Rasayan (Intellect Promoter). It has been traditionally used as a brain tonic to enhance learning, memory development and concentration. The use of Brahmi has been documented to relieve patients from anxiety and even from epileptic disorders.

With the incidence and prevalence of epidemics and pandemics around us every second year that brings mortality, poverty with it. The importance of keeping good mental health was never of this paramount importance. The use of smartphones and gadgets until the late nights pose a hindrance to a deep sleep. The result is more of insomnia episodes in our society. A calmer and natural remedy in the form of Brahmi Oil can help in a deeper and better sleep without you relying on any sedative for the same.

In the last two decades, our lives have changed at an abrupt pace while following a lifestyle that keeps us always on our toes even when we sleep. Even with presences of health clubs all around us to give you broad shoulders and toned chest, you probably may end up having a chiseled body, but what do you do for your mental health? When was the last time you gave your head a massage for it cope with daily stress, anxiety and the ease it needs?

Stress causes the greying of your hair, and your hair is growing grey, and this becomes one more reason to take the stress. A large percentage of baldness is co-related with this stress what recent researches tell us. If you know a little bit of Ayurveda science, then you might have heard of aggravated ‘Pitta’ in your body which if goes untreated can give you anxiety episodes, panic attack bouts, restlessness, sleep deprivation, and baldness. The ‘Pitta’ pacifying property of Brahmi is much known to counter all these health issues.

Ok, you might tell now that you cannot go out for a medicated head massage in an Ayurveda therapy centre but what if this therapy is just in your reach now. Would you start giving your head much needed soothing comfort it needs as, after all, it is all a mind game that you start your day in the morning? If yes, the following benefits from Brahmi oil would help you try this to further nourish your cranial cavity that carries the most important organ of your body, i.e. BRAIN.

The health issues stated above can be effectively combated with this bottle of Brahmi oil from Sukrit Ayurveda.

The anti-dandruff and hair conditioning properties of Brahmi Oil makes it an indispensable hair product on your shelf.

Brahmi oil helps in inducing sleep naturally because of its ‘Pitta’ pacifying properties according to Ayurveda science.

The massage from Brahmi Oil helps in deep concentration as it improves blood flow to the brain.

Because of its ‘Pitta’ pacifying nature, Brahmi Oil relaxes the skull in summers and acts as a coolant for it.

Known for calming ‘Pitta’, the regular massage from Brahmi Oil gives you a balanced emotional sense of well-being.

Also known as Indian pennywort, extracted from Brahmi herb is the main ingredient of Brahmi Oil.

‘Sesame’ or ‘Tila’ too has been listed under the category of ‘Keshya Dravya’ or drugs that promote the growth of hair.

The herb is known for its therapeutic effect on strengthening hair. The oil of ‘Sesame’ is used as the base for Brahmi Oil.

Manufacturing of Sukrit Ayurveda’s Brahmi Oil is done as mentioned in the traditional Ayurveda literature while following standard and stringent quality processes of production. A decoction is made of Brahmi with water and then added to the base oil of Sesame and brought to a slow boil until there is no water remaining.

How to use Brahmi Oil:

There are no reviews yet.

Be the first to review “BRAHMI OIL” Cancel reply
X